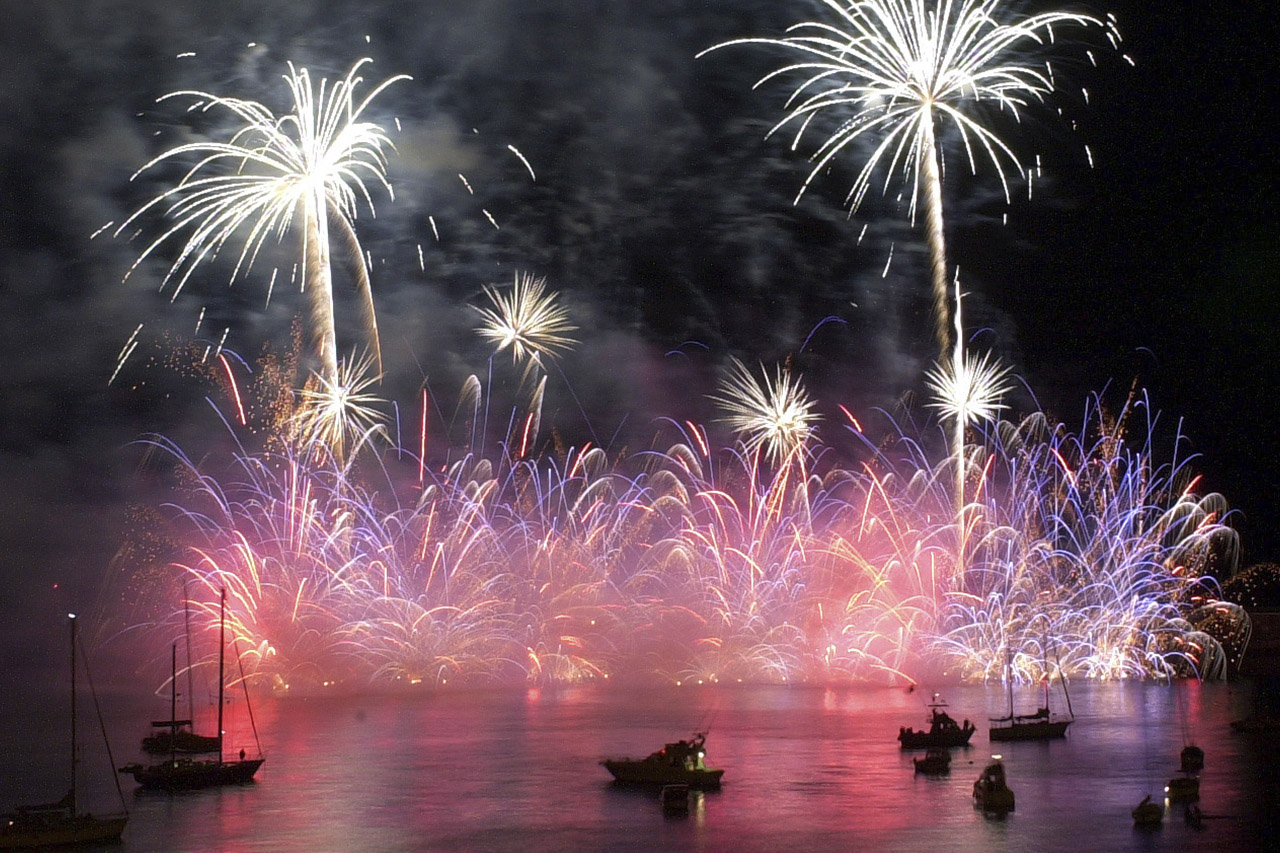 The Madeira Atlantic Festival, an event that sets the beginning of the summer season in Madeira, is one of the most recent tourist entertainment events, to be held betweem June 3rd to 24th.

This event consists of a diverse set of initiatives spread throughout the month of June, with emphasis on the pyromusical shows; the Atlantic Roots Festival and the Regional Arts Week.

The pyromusical shows are held on four consecutive Saturdays of the month of June, at 10:30 p.m. at the pier outside Pontinha. These wonderful and exciting performances, lasting about 20 minutes each, combine fireworks and music in a unique experience for tourists and residents.

In these shows, companies will compete for a trophy awarded by public vote, through the Internet and boxes located in strategic places in Funchal city (City Pier – day of the show, La Vie, Marina Shopping, Av. Arriaga Tourism Office).

The Regional Bread Fair is an event organised by the Funchal Lions Club for over 20 years and usually takes place at Largo da Restauração, with the purpose of raising funds for the club’s charity works. Each installment of this event includes entertainment by folk groups in the mornings and afternoons of each festival day, and a Serenade after the fireworks.

Atlantic Roots Festival
The 2016 edition comes with new surprises. With a new image and programming, location, date, and concept, this festival merges different genres, sounds, as well as new musical trends through a more select artistic quality approach, with particular emphasis on the Lusophone component.
This three-day festival (June 9th to 11th) aims to reach a demanding, but very diversified audience. Its overall aim is to a have a greater international projection, while also strengthening the region’s cultural offer.
The main stage will be at the gardens of the emblematic Quinta Magnólia, between 9th and 11th June, a musical event with some surprises. The first night of the festival will be dedicated to national music, the second night to new sounds and trends such as Black Music, Soul or Funk, and the third and last night will highlight the excellence of Portuguese music. Among this edition’s many headliners, the ones that stand out are Elida Almeida (Cape Verde), Lula Pena (Portugal), Petite Noir (South Africa) and Sons of Kemet (United Kingdom), among others.

Regional Arts Week
This is an event organized by the Regional Art Education Association - AREArtística, intended to showcase the learning and artistic skills of Madeiran students, acquired during school, through various activities that will be held in the city centre, specifically the "Feast at the Gardens", the Regional Artistic Meetings, the Regional Exhibition of Artistic Expression, and ESCOLartes. The programme includes several artistic performances in the areas of Song, Drama/Theatre, Instrumental, Traditional Madeiran Chordophones and Dance, in addition to the Regional Exhibition of Artistic Expression, which includes a Painting contest. This event, in its forth edition, shares the artistic work and experiments of about 4000 students from the local primary and secondary schools, and the participation of several groups in the field of Special Education, consolidating bonds between local schools and the community, from a social openness perspective.

The Popular Saints Festivities are celebrations that are held in several countries, historically related to the summer solstice pagan festival, which was celebrated on June 24th. The Autonomous Region of Madeira is no exception, and a bit throughout the Region, the month of June is synonymous with celebrations in praise of the three Popular Saints: Saint Anthony, Saint John and Saint Peter. The Saint John altars, which constitute a festivity based in a neighbourhood tradition, in addition to the traditional food of the Popular Saints, holds a public contest of the Altars to the patron Saint. It takes place every year during the week that includes Saint John’s Day, usually the last week of June. It is held in Rua da Figueira Preta, Travessa dos Reis, Rua da Conceição and Praça do Carmo.