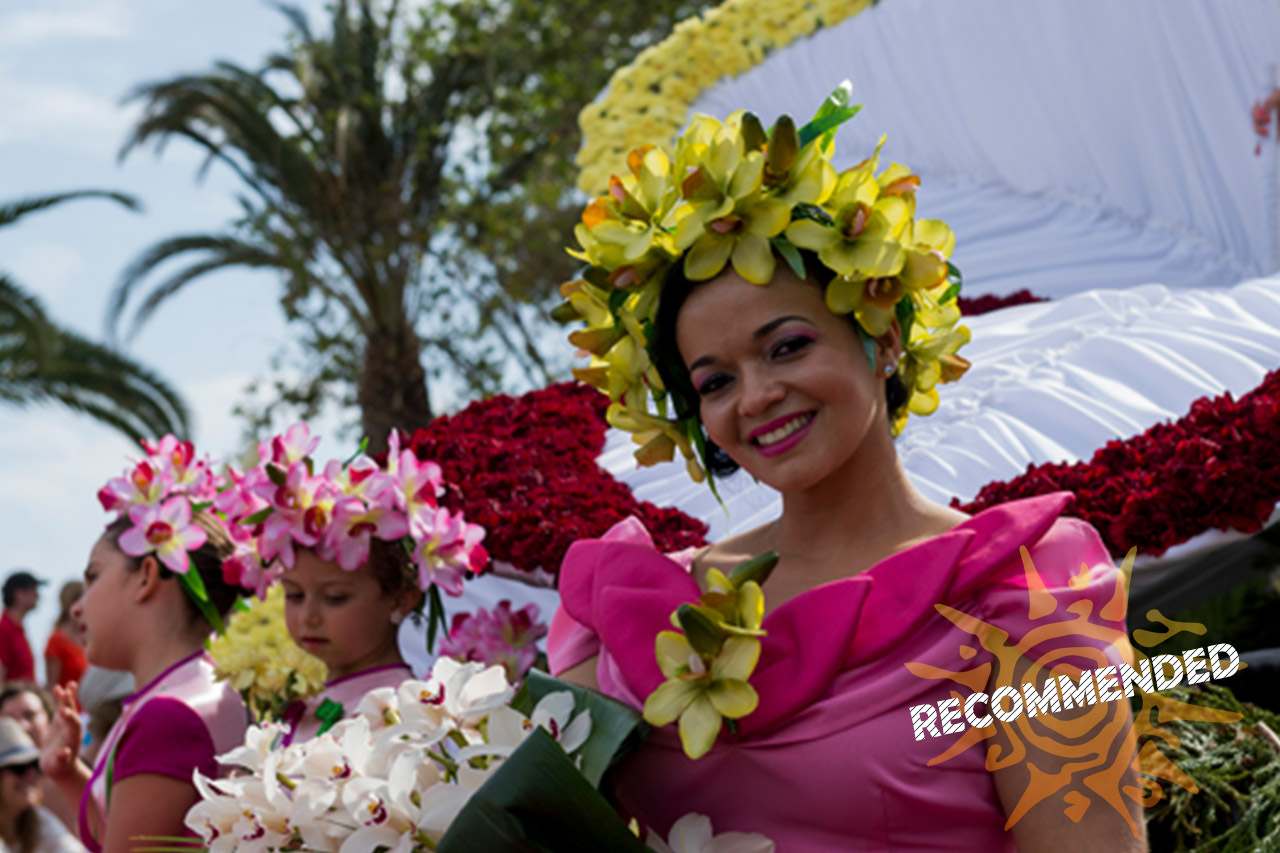 Floral species originating in many parts of the world bloom in Madeira, as the island meets specific climatic conditions that allow species from both tropical and cold regions to flourish.

The Flower Festival is a tribute to spring, and the celebration of metamorphosis and rebirth, fertility and the abundance of the flowers that colour, perfume and inebriate the surrounding environment and that give value and take the good name of this tourist destination across borders. Find out more about what to expect from the Madeira Flower Festival:

Saturday
On Saturday morning the Children's Parade takes place, in which hundreds of children, dressed for the occasion, parade to Praça do Município to build a beautiful flower mural symbolically named “Wall of Hope”.
This initiative, which has been held for over three decades, combines childhood innocence and the delicacy of flowers in a ceremony calling for peace in the world. Each child takes a flower and the ceremony usually culminates with a release of doves and a children's show.

Friday to Sunday
On Sunday afternoon, the streets of Funchal city centre are once again filled with music, colour and soft aromas, with the sumptuous float parade, which harmoniously combines numerous floral species with blooming decorations full of creativity. The Flower Festival Float Parade, held since 1979, is one of the most striking and eagerly anticipated events of the entire festival, for tourists and residents alike. This event is known for the magnificence and splendour of the floats and costumes of the hundreds of participants, mostly children, richly adorned with numerous, varied and magnificent floral species, parading along a planned route to the sound of festive musical themes and performing both simple and elaborate choreographies.

The Flower Festival is also a cultural event. Tradition is particularly associated with the event, whether through the performances of folk groups, or through the construction of the beautiful floral carpets. At the same time, homage is paid to flowers at the magnificent Flower Exhibition and the city is animated with music concerts and variety shows.


Flower Market
The flower market contributes to raise public awareness to the countless ornamental and floral species on the island. Visitors and locals can buy them in a picturesque setting.

Flower Exhibition and Workshops
The Flower Exhibition is held in the centre of Funchal, at Praça do Povo. This exhibition is an extension of the exhibit held at the former Ateneu Comercial of Funchal. This unique flower display shows the finest flowers grown with much care and devotion, all around Madeira. The flowers in display are judged under various categories and the best are awarded prizes by a panel of experts.
In addition the Praça do Povo will also be the centre stage of several workshops and crafts exhibits.

Flower Carpets and Decorations
The abundance of Madeiran flora has greatly contributed to the establishing of this art form. This traditional creation of flower carpets thrives a little bit throughout the island and had its origins in the decoration of religious processions. Due to its undeniable beauty and detail, for the past several years, the flower carpets have been reproduced on the streets for the Flower Festival, establishing alongside the floral sculptures, a major contribution to the magnificence of the city’s decorations, as their careful construction is shared and admired by visiting tourists. These wonderful pieces of floral art are displayed in the central walkways of Avenida Arriaga.

Madeira Auto Parade
The “Madeira Auto Parade" is an exclusive event that integrates for the first time the Flower Festival festivities. Organized by the Association "The Classic Motor Exhibition" - ACME and the Clube Carocha da Madeira, this enterprise intends to join both the glamour of classic vehicles and motorcycles, alongside with the flowers of Madeira, incorporating one of the largest exhibitions, and national restoration and elegance contests, an opportunity to admire some of the best vehicles and auto parts, which will be on display at Avenida Francisco Sá Carneiro.
The vehicles registered in this parade, will circulate in pairs, an exhibition that will promote moments of pure entertainment, colour and beauty promoted by various musical bands and extras, dressed in costumes inspired by the flowers of Madeira.